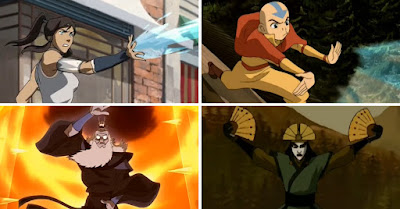 Earth; Fire; Air; Water. Long ago, Empedocles theorised that four elements lived together in harmony. Then everything changed when Democritus attacked. Only Aristotle could stop him. But when the world needed it most, modern chemistry was still several thousand years from being invented ...

Empedocles’ poems don’t survive. But Aristotle’s Physics and On coming to be and passing away do. As a result, a number of people have got it into their heads that Aristotle was reponsible for the idea of the classical elements. Here’s a snippet from a 2002 lecture by a Florida State physics professor about ‘Aristotelian’ physics:

This slide has ended up being cited by the Wikipedia article on ‘Aristotelian physics’ as the supreme authority on the classical elements.

Now, it isn’t completely made up — in the limited sense that some people, including even some specialists, do claim some of these things.

But you won’t find any of it in Aristotle himself.

The thing about aether is probably the biggest one, because I have seen it repeated in so many places. So let’s just repeat. Aristotle doesn’t treat aether as a fifth element.

Here’s what Aristotle does say.

Now a lot of this is wrong of course. Atoms are real; natural motion isn’t a thing, but buoyancy is; it’s the earth that’s rotating, not the sky. But that’s no excuse for misrepresenting Aristotle. His theory of matter is about four physical properties, not about four substances. And nowhere does he declare a canon of five elements, with aether as the fifth.

He even calls Empedocles’ model self-contradictory. Empedocles’ elements are supposed to be distinct, fundamental substances; yet Water evaporates into Air, condensation from Air produces Water.

So Empedocles evidently contradicts the observed phenomena, and contradicts himself too. For he says that none of the elements can emerge from another, but that everything is made of these; but at the same time, once he gathers all of nature (except Strife) into the One, he says that each of the elements is derived from the One.
Aristotle, On coming to be and passing away 315a

A second-hand report of one of Aristotle’s lost works makes it clear that he thought of heavenly bodies as ‘fiery’, and not made of a fifth element.

Therefore, because the Fire of the sun is similar to those fires that exist in the bodies of animate creatures, it must be that the sun is also animate ... So since the origin of some creatures lies in Earth, others in Water, and others in Air, Aristotle thinks it absurd to imagine that no animal is generated in that element which is most suited to generating animate things.
Cicero, On the nature of the gods 2.41–42

Cicero (our source) goes on to talk about how the ‘stars occupy the aetherial region, which is extremely thin’. Various modern scholars have taken that as meaning that Aristotle, too, linked aether to the usual four elements. But, again, it’s indirect. And even Cicero doesn’t cast aether as the fifth member of a set of five. He refers to ‘the aetherial region’ (aetherium locum) as a location, not a substance. He talks of stars being generated there: that is, Cicero is actually thinking of ‘the aether’ as a place occupied by Fire, but only very sparsely, until it generates stars.

Aether isn’t a distinct element: it’s a hangover from archaic flat-earth cosmologies. For example in Homer, thick misty Air (aēr) is at ground level, and clear, bright Aether (aithēr) is above it, filling the heavens. On mountain-tops the air is thinner, and you find yourself above the clouds: that’s supposedly where you get close to the aether.

The elements in Plato

Aristotle isn’t our earliest source on Empedocles’ elements. There’s an earlier report in Plato’s Timaeus. And it’s Plato, I think, that has prompted some modern readers to think in terms of a group of five.

The passage is hard to interpret (like most of the Timaeus): Plato could be misconstrued as saying that celestial bodies are made of a fifth element. What he really seems to be talking about is the shape of the universe as a whole, not the material that stars are made of.

Aether does come up a bit later, in passing. But Plato makes it very clear that it isn’t a separate element. He treats aether as a variety of Air, in the same way that flames, firelight, and glowing embers are all varieties of Fire (Timaeus 58c-d).

The context is that Plato is trying to combine two theories of matter: Empedocles’ model of four elements, and Democritus’ atomic theory. Plato also injects his own fondness for ideal abstractions. He proposes that each element is made of a single type of atom, and the four atom types have the shapes of the ‘Platonic solids’. There are five possible Platonic solids, so according to Plato’s perfectionist logic, that implies there must be some fifth thing in the material world that corresponds to the fifth solid, the dodecahedron.

Of these solids, Plato decides the cube is the most ‘immobile’ one, so that’s Earth. For the others, Fire is the lightest and smallest, made of tetrahedron-shaped atoms; Water is the largest of the triangle-faced solids, the icosahedron; Air is in between, the octahedron.

And, since there was still one more structure — the fifth — God applied it to the whole, and decorated it with life.
Plato, Timaeus 55c

‘The whole’ must mean the cosmos, the sky. But not the substance of the sky. In the last bit, ‘decorated it with life’, the Greek word used, diazōgraphōn, is probably meant to evoke the twelve constellations of the zodiac around the ecliptic. The zodiac isn’t arranged in a dodecahedral shape, but perhaps the theme of twelve-ness was enough to sustain Plato’s wordplay.

Surprising but true. Intuitively, you’d imagine an icosahedron would be closer to spherical, because it has more polygons. It turns out that pentagon-shaped faces are more of an advantage. The dodecahedron is better at filling a sphere. If you’re an ancient Greek and you want to calculate the volume of a sphere, but you don’t know the value of pi, and so you resort to the method of exhaustion that was popular in classical Greek geometry, then a dodecahedron provides closer bounds than any other solid.

So, in Plato’s model, the dodecahedron is the shape of the universe; the other four solids are the shapes of the four kinds of atoms. Don’t go taking this seriously, of course! Plato liked maths, but he was definitely no empiricist. This whole imaginary concoction is driven by his obsession with the idea that real phenomena are manifestations of ideal abstractions.

Aristotle is more logical, albeit with the same limitations on his knowledge. Given that he knew nothing about atoms and elements as we understand them nowadays, he still makes a reasonable amount of sense, so far as he goes.

For Empedocles says that there are four physical (elements); or a total of six, including those (elements) that cause motion (i.e. Love and Strife). Anaxagoras and Leucippus and Democritus, on the other hand, say there are infinitely many. The first (Anaxagoras) treats homogeneous things as elements, like Bone, Flesh, and Marrow, and every substance where a portion is synonymous with the whole. Democritus and Leucippus, however, say that these (homogeneous) things consist of indivisible particles, and that they are infinite in number and in their shapes; while substances differ from one another depending on the elements they consist of and their composition and arrangement.

Anaxagoras’ followers apparently take a stance opposed to that of Empedocles' followers. For Empedocles says that there are four elements — Fire, Water, Air, and Earth — and that these are the substances that are simple, rather than flesh and bone and other homogeneous substances. But Anaxagoras’ followers say that it is these homogeneous substances that are simple elements, while Earth, Fire, Water, and Air are compounds.

Aristotle, On coming to be and passing away 314a–b

Aristotle rejects Democritus’ atomic theory, but he also rejects Empedocles. He accepts the four elements as empirical phenomena, but he rejects the idea that everything is made of them. He doesn’t reject Anaxagoras’ ideas about homogeneous substances: it seems that’s where his sympathies lie.

For Aristotle, Empedocles’ elements are emergent. They’re derived from combinations of properties: hot, cold, dry, and wet. Apply these properties to raw matter — what he calls hylē (literally ‘wood’) — and you get stuff that approximates the four elements. If something is hot and dry then it’s fiery, if it’s cold and wet then it’s watery. The properties come first.

He quickly gets into trouble, though. Aristotle questions whether these binary properties denote the presence vs. absence of a quality: so hot = ‘with heat present’, cold = ‘without heat’, and so on.

But someone might well be puzzled about a simple absence, and whether it is one of two terms in an opposition. For example, is it that Earth and other massive matter denotes the absence of a quality (heat), while Fire and rising substances denote the presence of that quality? Or is it that Earth also denotes a presence, while the absence denotes raw substance — the hylē of both Fire and Earth alike? And is the hylē of each of them different? For then they could not come to be out of one another, that is, out of their opposites. For the oppositions are manifested in these things: Fire, Earth, Water, Air.
Aristotle, On coming to be and passing away 319a–b

This is where Aristotle’s lack of knowledge gets him tied in knots: this passage makes little sense to a modern reader. It’s obvious to us, with an understanding of chemical reactions and thermodynamics, that these are actually very bad questions. We know that physical properties are determined by heat and pressure, not by irreducible characteristics like whether ‘wetness’ is present.

This business of thinking about presence and absence of qualities misleads Aristotle before he can even begin. I think it’s still a huge improvement on Plato, with his fantasies about four species of polyhedral atom. But it isn’t like you’ll actually learn anything about chemistry from Aristotle.