For a while there, ‘Iliad, first edition’ became the most searched for book on AbeBooks, a second-hand bookseller aggregator. This was thanks to the film The boy next door (2015), starring Jennifer Lopez as a classics teacher (yes, you read that right), and a 29-year-old Ryan Guzman as one of her school pupils.

In the film, Guzman’s character becomes obsessed with J-Lo. He gives her a special gift, because he’s a Nice Guy. To spare you from having to watch it, here’s the dialogue:

The film was immediately mocked on all sides for the idea that a modern printed book, in English, with very obviously late 19th century covers, could be the ‘first edition’ of a 2700-year-old poem in ancient Greek. If you do watch the scene (oh God, why?), you may notice J-Lo declares it a first edition before she even gets to the title page.

The Los Angeles Times tracked down the exact edition used in the film. It’s an 1884 copy of Alexander Pope’s translation of the Iliad, published by Belford, Clarke, & Co. (Chicago/New York), with John Flaxman’s illustrations, and notes by Theodore Alois Buckley. Here’s a link to this edition on the Internet Archive.

For the record, the bit about getting this for a buck at a garage sale is the only sensible part of the story. At the time I write, you can pick up a copy of this book -- maybe not the exact same print run, but a 19th century copy -- for USD$16.28 at AbeBooks. Here’s one with the same cover as in the film, which sold in 2016 for USD$35. OK, not quite one buck. But I can easily imagine someone selling it from their garage for a fiver. (Well -- except that in a later shot, the book clearly still has a bookshop’s sticker on its spine ...) 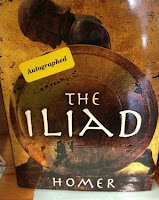 The whole situation reminds me of the story of a recent edition of the Iliad, pictured above, with a sticker on the cover declaring that it’s autographed by the author. Dr Maria Pretzler reported that one in 2012.

(Well, it would be impressive, to be fair.)

This time, it’s Mel Gibson playing a teacher. At one point Gibson recites the start of the Aeneid, in English. Briggs (2008: 196-197) offers another discussion of this scene; and take a look at Sellers (2012) on depictions of classics teachers in films.

Gibson recites a slightly altered form of an obscure 1908 translation by John Jackson. Jackson’s version is nominally prose, but in the opening it conveys some elements of Vergil’s dactylic hexameter in English. Here’s the text, which I’ve divided into hexameter lines:


Arms I sing, and the man, who first from the shores of Troy came,
Fate-exiled, to Italy and her Lavinian strand -- much
buffeted he on flood and field by constraint of Heaven and
<fell> Juno’s unslumbering wrath.

(See if you can hear the persistent dum-dum and dum-diddy rhythms in the first three lines.)

While he recites this, we get to see the Latin version he’s looking at, inscribed on a clock he once won as a prize. And ... well, oh dear. Here’s the Latin inscription.

Muddled word order and misspellings all sic.
This Latin is horribly mutilated -- worse than the other side of Gibson’s face in the film. As it stands it makes no sense at all. It’s taken from an interlinear version of Vergil by Hart and Osborn (1882), where they adjust the Latin word-order to match their English translation. Hart and Osborn’s English isn’t great either:


I sing, arms and the hero who, driven by fate,
first has come from the coasts of Troy to Italy and the Lavinian
shores: much he has been tossed both on land and on the sea
by the power of the gods above, on account of the lasting wrath of cruel Juno.

Yeck. Even the punctuation is horrible. Here’s what Vergil actually wrote:

I suppose it could arguably make a kind of sense for a Latin teacher to have the clock inscribed with a pedagogical version of the text. I don’t like it. But still, we could say that it’s there to emphasise his role as a teacher. Later in the film, Gibson quotes an exercise from the standard textbook Wheelock’s Latin, chapter 13 (‘Certain teachers used to teach their students with such great skill that the students themselves indeed desired to learn’).

The Homeric hymns and Star trek: the next generation (1993)

Lowani under two moons. Kira at Bashi. The river Temarc, in winter.

Or, to put it another way: Good afternoon. I’m going to tell you a story. Are you sitting comfortably? Then I’ll begin.

‘Darmok’, season 5 episode 2 of Star trek: the next generation, is one of the finest pieces of Star trek of all time. The Enterprise encounters a race of aliens called the Tamarians, but for some reason they cannot communicate with one another. Captain Jean-Luc Picard (Patrick Stewart) gets whisked onto an isolated planet, where he has to team up with the Tamarian captain (Paul Winfield) and learn his language to survive. It turns out that though the Tamarians speak a kind of English, every statement is couched in metaphors based on their mythology. By the end of the episode, Picard -- and the audience -- have picked up enough of this system to follow a complete conversation in Tamarian, without subtitles or translation.

After the action is over, Commander Riker (Jonathan Frakes) finds Picard reading a copy of the Homeric hymns. In Greek. Naturally.


Riker. I hope I’m not intruding.
Picard. No, of course not, Number One. Please.
Riker. Damage reports, ready for your review.
Picard. Thank you.
Riker. [noticing the book] Greek, sir?
Picard. Oh. The Homeric hymns. One of the root metaphors of our own culture.
Riker. For the next time we encounter the Tamarians?
Picard. More familiarity with our own mythology might help us to relate to theirs. [pause] <The> Tamarian was willing to risk all of us. Just for the hope of ... communication, connection. Now the door is open between our peoples. That commitment meant more to him than his own life. ... Thank you, Number One.

The text in Picard’s book isn’t easy to make out. I guess the big news for a Star trek fan would be that it genuinely is an edition of the Homeric hymns, in Greek. He’s reading the Hymn to Earth, if you want to know. And that seems fitting enough. If you can read German, do check out Heilmann and Wenskus’ (2006) article on this episode: Georg Gerleigner very kindly drew my attention to it a couple of years ago.

A bigger surprise, for me at any rate, is that it’s a pretty obscure 19th century edition. Nowadays, someone who wants to read the Hymns in Greek would usually use M.L. West’s 2003 Loeb edition. If they’ve got low standards, they might stoop to Allen’s 1912 Oxford edition. Or if they’re being extra scholarly, they might use Filippo Càssola’s 1975 edition.

Picard is reading Baumeister’s edition. If you look for Baumeister’s text at a research library, you’ll be lucky to find it. If it’s there, it’ll probably be in volume 3 of the Teubner edition of Homeri carmina, printed and reprinted in 1870, 1888, 1910, and probably a few more.

But even that isn’t good enough for Picard. He’s reading the editio maior (1860) -- the major edition, for really hard-core scholars.

This is a pretty rare book. There are no copies in my country -- hell, I don’t think there are any copies in the southern hemisphere. In America, plenty of university libraries have the minor edition. But the major edition is only held at three libraries in California: UCLA, Berkeley, and the Claremont Colleges. (No, it isn’t at USC, Stanford, or UCSB.) A few other libraries around the US have it: there are copies at Reno, Boulder, Austin, and the usual suspects further east. (Rather greedily, Michigan has two copies.) [Correction: I misinterpreted the Michigan catalogue. It seems they don’t have it at all. Sorry.]

So I’m left wondering two things. First: why is Picard, in the year 2368, reading an 1860 edition? Have all the more recent (and better) editions disappeared between the 1990s and 2360s? Wot no Càssola?

Second: where did the programme makers get the copy used for filming? It isn’t the UCLA copy: that’s been re-bound, but Picard’s copy still has the original marbled boards. One of the episode’s writers, Philip LaZebnik, reportedly has a degree in classics: might it be his copy? Hey, anyone at a university that has a copy, do you want to go and check if your library’s copy matches the cover shown when Riker walks through the door (see image above, left)?

If you look carefully, you’ll notice there’s a nick from where the pages were cut -- so at any rate that shows it didn’t come from a replicator on the Enterprise.

Anyway, it was a nice day when I finally figured out which edition this is. Sokath, his eyes opened!