Who designed the Julian calendar?

The Roman calendar was a mess before the Romans adopted the Julian calendar in 46 BCE. It was ostensibly lunar, but months ranged from 28 days to 31 days, as they still do today, so the months didn’t line up with lunar phases. It had intercalary months to keep it in step with the seasons, but political intrigues resulted in it being nearly three months out of synch.

In 46 BCE, Julius Caesar cut through the political red tape and decreed a fixed calendar based on a 365¼ day cycle. To do this he had to draw on his powers as both dictator and pontifex maximus, or top priest. It was a phenomenal achievement. The calendar no longer even pretended to be lunar, but no one cared. It was the world’s first solar calendar. And that was even better.

Pliny the Elder claims that one of the experts Caesar employed as a consultant was an astronomer named Sosigenes. I’m here to tell you that while the Julian calendar is magnificent, Sosigenes’ role is overblown. Also, we have no idea where Sosigenes came from.

We still use a slightly modified form of Caesar’s calendar today. The modification is so slight that no one alive today remembers the last time our calendar behaved differently from the Julian calendar, and hardly any of us will live to see the next time.

The new calendar was designed so that the equinoxes and solstices would fall on the same date every year. The traditional dates shown below are different from the modern ones, because the Julian calendar isn’t perfect. It’s based on a solar year of 365.25 days, but a solar year is actually 365.2422 days. As a result the solstices slip out of synch by one day every 128 years. To fix this, in 1582 the Gregorian calendar was instituted, as a slight revision to the Julian calendar. It was pinned to the equinox and solstice dates as they were in 325 CE, because 325 CE is when the Nicene formula for calculating the date of Easter was finalised.

Ancient astronomers from Hipparchos onwards were aware that the solar year was slightly under 365¼ days. Ptolemy reports on two sets of observations, one made by Hipparchos, the other by himself, which calculated the error to be approximately one day every 300 years: that is, a solar year of 365.2467 days (Almagest 3.1; 204–206 ed. Heiberg). Caesar was unaware of Hipparchos’ observation, or he chose to ignore the discrepancy. Given that the true error is larger than Hipparchos or Ptolemy thought — one day every 128 years — that’s probably just as well.

... Caesar the dictator forced individual years back to the cycle of the sun, employing Sosigenes, who was an expert in his science. ... And Sosigenes himself, though more careful than others in his three treatises, did not stop questioning, since he corrected himself ...

Sosigenes appears in one other place, when Pliny cites him for the statement that the planet Mercury never appears more than 22° away from the sun (Natural history 2.39; actually the maximum elongation of Mercury varies between 18° and 28°).

Look up Sosigenes today, and you’ll often find him called ‘Sosigenes of Alexandria’. 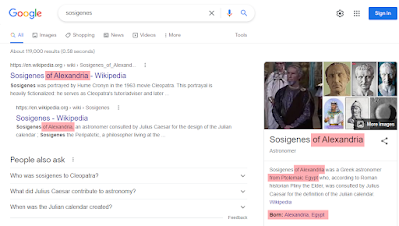 But wait. Pause. Rewind. Take a look at Pliny, and let me remind you he’s our only source for Sosigenes. Do you see any mention of Alexandria?

No, you don’t. The idea that Sosigenes was Alexandrian is entirely a product of the modern imagination. I’ve found it in books as far back as the 1700s, so it’s not very recent, but it’s still a modern fiction.

The tradition of calling Sosigenes ‘Alexandrian’ originates in indirect testimony — not about Sosigenes, but about Caesar himself.

Caesar was in Alexandria in 48–47 BCE, first hunting down Pompey, then bringing down Ptolemy XIII and setting up Cleopatra as sole pharaoh of Egypt. One mediaeval source tells us that he took a strong interest in astronomy during wartime —

(Caesar) says that it was in wartime that he focused on the study of astronomy: he put aside all other thoughts in the war. And the outcome proves that he meant this truly, since his book that he wrote about calculation is not inferior to that of Eudoxus.

And four ancient sources tell us that Caesar’s new calendar was based on ‘Egyptian teaching’.

So this must be where the idea of Sosigenes being Alexandrian comes from. Even though none of these writers mentions Sosigenes, and even though no ancient writer connects Sosigenes to Egypt in any way.

Obviously that’s no basis for calling him ‘Sosigenes of Alexandria’. It’s a fabrication, and it needs to stop.

But come to that, should we even take them at their word that Caesar’s source of information was ‘Egyptian’?

According to Macrobius, Caesar drew attention to parallels in the Egyptian calendar himself. But the Julian calendar isn’t an Egyptian product in any sense. There are five reasons I say this:

Taking these points into account, the simplest reading is that Caesar and other ancient observers drew attention to Egypt because the Egyptian calendar was already close to the correct value, and not because the new calendar was based on it.

And if you look carefully at John Lydus’ account, above, you’ll see his story is clearly not true. The calendar of ‘antiquity’ that he describes is the Alexandrian calendar after 30 BCE. Caesar can’t have got the idea of a 365¼ day calendar from Egypt, as Lydus claims, because Egypt didn’t have a 365¼ day calendar at the time.

Where did Caesar’s calendar really come from?

The astronomer who measured the solar year as 365¼ days was Kallippos of Kyzikos, who studied at Plato’s Academy and Aristotle’s Lycaeum in Athens in the late 4th century BCE. Among other things, Kallippos determined exact periods between each of the solstices and equinoxes.

And by the way, observe that Meton, Kallippos, and Hipparchos all lived in Greece, not Egypt. Alexandria has nothing to do with this story.

So, what should we infer: is it that Sosigenes made Kallippos’ work the basis for the Julian calendar? That’s a possible interpretation, except that it’s still missing a key fact.

You see, Caesar himself wrote a detailed treatise called De astris (‘On the stars’), on astronomy, on the length of the year, and containing a calendar with solar dates for numerous seasonal and astronomical phenomena, including solstices and equinoxes.

That is to say, it would appear that the Julian calendar is the result of Julius Caesar’s own research. He didn’t farm out the work to experts, he was the expert. When Pliny cites four schools of thought about measuring the sun’s progress around the ecliptic — the Chaldaean, Egyptian, Greek, and Italian schools — it’s Caesar himself that represents the Italian school.

The De astris doesn’t survive, alas. But the fragments, preserved in other extant sources, are collected in Alfred Klotz’s 1927 Teubner edition, and they strongly suggest that not only was Caesar knowledgeable about astronomy, his work was startlingly carefully thought out in other respects too. Caesar didn’t just lengthen the Roman year to 365¼ days. He had solid, specific reasons for the month lengths he adopted; he made his own observations of the stars and seasonal weather; he put a huge amount of effort into making the new calendar politically acceptable and into avoiding religious upsets; even more, he put careful thought into which days in each month were going to be the extra days.

In both systems, intercalations — extra days to make the year line up with the seasons — were in February. In the republican system, an intercalary month could be inserted after 23 February, and in the Julian system, every fourth year the 24th of February would last two days, which Caesar called bissextus.

Incidentally, for those who already know something about the Roman calendar, the pre-Julian month lengths are the reason that ‘July, October, March, and May / have Nones the 7th, Ides the 15th day’. It’s because those are the months that had had 31 days all along; the 29-day months had them on the 5th and the 13th, and Caesar didn’t change that. The extra days he added were towards the end of each month, so as to avoid altering the dates of religious observances.

The dates of the solstices and equinoxes

The diagram I gave above is based on Pliny’s dates for the solstices and equinoxes:

Pliny’s figure for the period between the summer solstice and autumn equinox is missing, but a period of 92.5 days is implied by the other figures and by a 365¼ day year. It so happens that Ptolemy gives two figures that agree with Pliny, including the missing 92.5 day period —

The only date Pliny pinpoints is the winter solstice, on 25 December (NH 18.221). That implies the rest of the dates used in my diagram, above. Here are some other sets of solstice and equinox dates reported in the 1st and 2nd centuries BCE and CE.

There’s a substantial body of scholarship over these dates, but mostly about which coordinate system the ancient authors use for setting the points and divisions of the seasons against the sun’s progress through the zodiac (Neugebauer 1975: 593–600), and on what the above table may have looked like in the republican calendar (Mommsen 1859: 54–79 on the rustic calendar, tabulation at 62).

There is certainly more variation than you might think from looking at Christian traditions about the dates of Easter and Christmas. Christians from the 3rd century onwards consistently used the dates 25 March and 25 December for the spring equinox and winter solstice, as I described last year.

Those are the dates we find in Pliny, Columella, and (so Columella tells us) Hyginus, the most celebrated Roman astronomer of Augustus’ time. It’s striking that in Pliny these dates, which disagree with Caesar, are stuck in between two discussions of Caesar.

Pliny’s solstice and equinox dates are of great interest. Given that they partially correspond to what Ptolemy says about Hipparchos, they could be derived from Hipparchos.

Actually I suspect they might be Kallippos’ own dates. Remember that the Julian calendar slips out of synch with the seasons by 1 day every 128 years. As a result, when ancient writers give us calendar dates for solstices, we can estimate when those dates were observed. We compare the quoted dates with the dates as calculated by modern astronomy, and see which period they’re valid for.

We do need to allow leeway. Ancient observers made mistakes measuring the equinoxes and solstices: Ptolemy himself erred by a day in 139–140 CE (see notes to table above). With that in mind, here are the date ranges where the quoted dates are valid, to varying degrees of tolerance.

Caesar’s and Varro’s dates could plausibly have been observed in their own lifetimes. But in Pliny’s case, that’s quite a stretch. Pliny’s dates look as though they come from observations made much earlier.

It has been suggested that the 25 March/25 December dates could come from Hipparchos (thus Hannah 2005: 151, following a suggestion of Christian Ludwig Ideler in the 1820s). I think the full set of Pliny’s dates points to an earlier origin. And, given that Kallippos, the discoverer of the 365¼ day cycle, lived slap in the middle of the valid date range for Pliny, I’m going to suggest that Kallippos could also be the originator of Pliny’s season lengths and solstice dates.

Posted by Peter Gainsford at 13:01