This is how the entry for ‘Caesarean’ looks in the 1989 Second Edition of the Oxford English Dictionary:

2. (Also with lower-case initial): spec. (in Obstetrics) Caesarean birth n. (also Cæsarean operation, Cæsarean section) the delivery of a child by cutting through the walls of the abdomen when delivery cannot take place in the natural way, as was done in the case of Julius Cæsar. Also fig.

It’s basically unchanged since the original 1893 printing. Even the spelling ‘Cæsar’, as opposed to ‘Caesar’, is a bit of a giveaway as to how old-fashioned this entry is. The entry hasn’t yet been revised in the post-Second-Edition online revision.

The misinformation lies in the last nine words: ‘as was done in the case of Julius Cæsar.’ 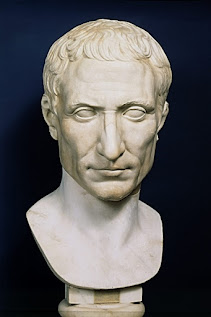 The myth arose because of an ancient story that linked the origins of the name ‘Caesar’ to a Latin word for ‘cut’, caesus. Pliny the Elder mentions the story that the first Caesar, Julius’ earliest ancestor, was born that way:

... and the first of the Caesars, who was said (to have been born) from cutting (caes-) his mother’s womb; the Caesones (family) also got their name that way.
Pliny, Natural history 7.47 (repeated in Solinus 1.68)

Later the story reappears in a commentary on Vergil’s Aeneid dating to around 400 CE, and two Byzantine encyclopaedias dating to the 900s and 1000s. By then, it’s turned into a story about Julius Caesar himself — or J.C., as Asterix sometimes calls him:

The emperors of the Romans receive this name from Julius Caesar, the one who was not born. For when his mother died in the 9th month, they cut her open, took him out, and named him thus; for in the Roman tongue dissection is called ‘caesar’.
Suda κ.1199 Καῖσαρ (similarly Servius on Aen. 1.286; Et. Mag. 498.27-30)

This version of the story definitely isn’t true:

(If you’re observant you may have noticed that the Pliny text I linked to above has a footnote that also equates ‘the first of the Caesars’ with J.C. For the Suda that mistake might just be excusable, but the modern editor definitely should have known better!)

We can be confident that even Pliny’s relatively sensible version is pure fiction. There’s no shortage of origin stories for the name ‘Caesar’:

According to the most learned and erudite people, the person who was first called ‘Caesar’ got the name either (1) from an elephant, which in the Mauretanian language is reportedly caesai; or (2) because his mother died and he was born by cutting (caes-) open the belly; or (3) because he poured out of his parent’s womb with a thick head of hair; or (4) because he had pale grey (caesi-) eyes and thrived more than most people do.
Historia Augusta, Aelius 2.3-4

(Numbers 1 and 2 also appear in Servius on Aeneid 1.286: except that in Servius, it’s J.C.’s grandfather that killed the elephant — still not true; the name went back earlier than that — and the word supposedly comes from Carthaginian, not Mauretanian. Number 3 is inspired by the word caesaries ‘white hair’.)

With this context, it’s clear that all of the stories are inventions. They’re ‘just so’ stories, designed as guesses for how the name came about. Even if by some miracle one of them were correct, we’d never have any way of telling.

Having said that, there’s no doubt that the modern name for the life-saving procedure — ‘caesarean section’ — is based on the J.C. story. The illustration, above, from the 1506 edition of Suetonius, may even have been an inspiration. Some people suggest the name for the operation is linked to a (purportedly early) Roman law that mandated caesarean sections on women who died while pregnant, which came to be known as a ‘caesarean’ law in late antiquity, thanks to the J.C. story. That’s comparatively obscure, though: I find it easier to imagine 16th century physicians reading Pliny than the Digest of Justinian.

Calpurnia. Julie don’t go, I said, it’s the Ides of March, beware already!
Wayne and Shuster, Rinse the blood off my toga (1958)

This one’s relatively easy to dispose with. It’s only Shakespeare that has him saying ‘You too, Brutus?’ in Latin — or, to be strict: Shakespeare, and a few other 16th century plays.

The only ancient source to serve as a counterpart is in Suetonius, who has the following report of the assassination:

And when he realised that he was surrounded by drawn daggers, he covered his head with his toga, and at the same time he drew its fold down to the bottom of his legs with his left hand, so that he should fall more decently, with the lower half of his body covered. Like this, he was struck with twenty-three blows in the same way; at the first stroke he gave a groan, but uttered no cry. Though certain sources have reported that when Marcus Brutus attacked, he said to him (in Greek) ‘You too, child.’
Suetonius, Life of Julius Caesar 82.2

Even Suetonius doesn’t quite believe the story of the last words, and he was more gossip columnist than historian. Other accounts — Plutarch Life of Caesar 66.7), Cassius Dio 44.19.4-5 — agree about many details, including the covering his face, and in Plutarch’s case, the toga gesture and the number of blows, but there are no last words: J.C.’s only response to seeing Brutus is to cover his face. Cassius Dio, like Suetonius, emphasises that he spoke no words at all.

So we’ve got plenty to reject the words to Brutus as spurious. There’s also the fact that Brutus was not Caesar’s ‘child’ in any way, shape, or form (the story that Caesar adopted him is an invention, based on this very passage).

But it’s especially weird how the words are given in Greek. Despite the opinions of certain pop historians, Greek was not anything like a common mode of speaking for aristocratic Romans: even Cicero, who was fluent, wrote to his best friend, who was an ardent hellenophile, in Latin with only sprinklings of Greek. Augustus never got comfortable enough in Greek to hold up a conversation; Marius knew no Greek at all.

That strongly suggests the possibility that the phrase is a quotation, perhaps from a poem. A. J. Woodman, drawing on work by Pascal Arnaud, points out that two related phrases spoken to the future emperor Galba suggest a context. Suetonius reports how the young Galba had an audience with Augustus, and Augustus pinched his cheek and said, in Greek, ‘You too, child, will have a nibble of our power’ (Life of Galba 4.1). Elsewhere, Tiberius addresses Galba with the line ‘You, too, will taste command one day’ (Cassius Dio 57.19.4; Tacitus Annals 6.20.2). Combining these, Woodman suggests the reconstruction

In this form the line makes a dactylic hexameter, which would suggest an origin in Hellenistic epic or elegiac poetry (though it should be pointed out that the lack of a sense-break at the third-foot caesura raises grounds for doubt, and ποτέ doesn’t attach to τέκνον very comfortably).

If he’s right, that would make Caesar’s supposed phrase something along the same lines. He doesn’t mean, ‘Have you joined my enemies too? Woe is me!’ as in Shakespeare. Instead, it’s a statement of disgust at Brutus’ hypocrisy: ‘You’re no tyrant-slayer like your ancestor was — you really want power for yourself!’

The words may well be old, but the idea that Caesar spoke them is obviously a fictional invention. In the first place: Suetonius, Plutarch, and Cassius Dio all believe that he didn’t speak. And in the second place: who, while being stabbed 23 times, would offer a moral judgement on their slayer with an apposite epic quotation in a foreign language?

Posted by Peter Gainsford at 22:35