Were the Greeks scared of irrational numbers?

There is a widespread notion that the discovery of irrational numbers was a thing of horror to the ancient Greeks. This went especially for the school of Pythagoras. Pythagoras is best known today for a famous theorem about right-angled triangles -- and we shall look at that theorem another day -- but in antiquity, his significance lay in the fact that he was a semi-legendary guru who founded a philosophico-religious sect in southern Italy.

No writings by Pythagoras himself survive (and it is extremely unlikely he ever wrote any). But the things we hear about the sect make it sound bizarre at times: depending on who you read, the Pythagoreans conveyed their teachings only orally and only in a cave, they had weirdly specific beliefs about reincarnation, and they venerated unexpected plants like fava beans and mallow. The vast majority of this information is reported very late, and is almost certainly false; the bits that are true (whichever ones they are) are difficult to understand out of context.

The legendary Pythagorean veneration of orderly, rational numbers is well exemplified by a passage in William Meissner-Loeb’s graphic story Epicurus the sage, volume II (1991). Here the philosopher-hero Epicurus happens upon a group of Pythagoreans holding a ceremonious gathering to recite the powers of 2 (‘2 ... 4 ... 8 ...’), and Epicurus terrorises them by shouting out random numbers. They lose their concentration and flee, crying out, ‘Unclean numbers! Unclean! Unclean!’ and ‘Ahhhh! It’s happening again!’ 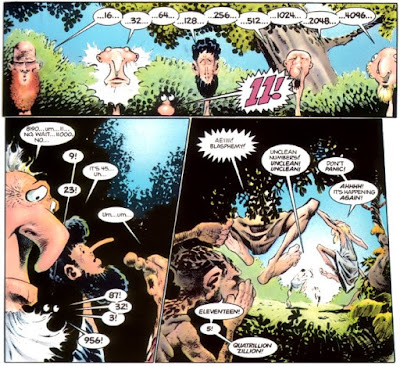 In 1972 the mathematician Morris Kline wrote in his book Mathematical thought from ancient to modern times (vol. 1, p. 32):


Numbers to the Pythagoreans meant whole numbers only. ...Actual fractions... were employed in commerce, but such commercial uses of arithmetic were outside the pale of Greek mathematics proper. Hence the Pythagoreans were startled and disturbed by the discovery that some ratios -- for example, the ratio of the hypotenuse of an isosceles right triangle to an arm or the ratio of a diagonal to a side of a square -- cannot be expressed by whole numbers. …The discovery of incommensurable ratios is attributed to Hippasus of Metapontum (5th cent. B.C.). The Pythagoreans were supposed to have thrown Hippasus overboard for having produced an element in the universe which denied the Pythagorean doctrine that all phenomena in the universe can be reduced to whole numbers or their ratios.

Not to put too fine a point on it, but every claim in this paragraph -- apart from the bit about Greek commerce using fractions -- is untrue. In reality,
Kline is not alone. And worse, an apparently reputable source like Kline can mislead more popular writers. Simon Singh, in his bestseller Fermat’s last theorem (1997), goes seriously overboard -- even more so than Hippasus --


[T]he idea that rational numbers... could explain all natural phenomena... blinded Pythagoras to the existence of irrational numbers and may even have led to the execution of one of his pupils. One story claims that a young student by the name of Hippasus as idly toying with the number √2, attempting to find the equivalent fraction. Eventually he came to realise that no such fraction existed, i.e. that √2 is an irrational number. Hippasus must have been overjoyed by his discovery, but his master was not. Pythagoras had defined the universe in terms of rational numbers, and the existence of irrational numbers brought his ideal into question. ...Pythagoras was unwilling to accept that he was wrong, but at the same time he was unable to destory Hippasus’ argument by the power of logic. To his eternal shame he sentenced Hippasus to death by drowning.

The father of logic and the mathematical method had resorted to force rather than admit he was wrong. Pythagoras’ denial of irrational numbers is his most disgraceful act and perhaps the greatest tragedy of Greek mathematics.

(For the record: we know nothing of the circumstances of the discovery, there was no execution, and Hippasus lived in the late 5th century BCE, more than a century after Pythagoras’ death.)

Singh paints Hippasus’ discovery in vivid colours. Does that make up for the fact that it is not only imaginative, but also completely imaginary? Hm.

I do not exactly blame Singh. Half of the relevant primary sources have never been translated into any modern language. But it does go to show how a story that is already distorted can metamorphose into something completely fictional.

So, what does the actual evidence tell us? The surviving testimony is as follows, in chronological order.
And the upshot of this testimony is:
But the worst of it is that even this honest summary is probably completely untrue as well. The fullest account comes from Iamblichus, and Iamblichus is notoriously untrustworthy. Pappos makes it clear that as far as he was concerned, it was a morality fable, not a sequence of historical events. Most of the late biographical material about Pythagoras is based on one or both of two accounts written in the 1st century CE, six centuries after Pythagoras’ death: one by Nicomachus of Gerasa, the other by Apollonius of Tyana. To judge from Iamblichus, Nicomachus routinely attributed miracles to Pythagoras, and -- no joke -- regarded him as an avatar of the god Apollo. Apollonius came to be regarded as a miracle-worker himself, in a surviving ‘biography’ which dates to the 4th century. Their biographies, and the surviving one by Iamblichus, are more like gospels for a Pythagorean mystic cult than anything historical.

None of them can be trusted an inch.

Trustworthy testimony about Pythagoras and the Pythagoreans is in short supply. Generally speaking, the earlier, the better: and Iamblichus and the others are very late. We get hints about Pythagorean doctrines in Herodotus (5th cenutry BCE), Plato, and Aristotle (4th century BCE). But most of that material relates to the mystical side of Pythagoreanism: in particular, the early sources have nothing to say about Pythagorean teachings about irrational numbers. So we have essentially no corroboration for anything that Iamblichus and other late sources have to tell us. It is all suspect, and it is mostly false.

Did I say Plato has nothing to say about irrational numbers? Well, not in relation to Pythagoreanism, maybe. But one of Plato’s dialogues does have a section devoted to a discovery made by Theaetetus of Athens, that numbers other than exact squares (1, 4, 9, 16, 25...) have irrational square roots (Theaet. 147d-148b). Theaetetus was no slouch: much of book 10 of the Elements may well be his doing. Theaetetus divides the integers into two groups: exact squares, which he called ‘square and equilateral’ (τετράγωνόν τε καὶ ἰσόπλευρον), and numbers that are not squares but are ‘rectangular’ (ἑτερόμηκες). He calls their square roots, respectively, a ‘length’ (μῆκος) and a ‘power’ (δύναμις); and ‘lengths’ and ‘powers’ are incommensurable with one another. ‘And similarly for solids,’ he finishes on a tantalising note.

In the dialogue, what is Socrates’ reaction to the revelation of irrational numbers? Is he horrified? disoriented? ‘startled and disturbed’?

No. He is impressed at a nifty mathematical discovery.

As we all should be. Irrational numbers were not a skeleton in the Pythagoreans' closet: if the Pythagoreans had anything to do with their discovery -- and that’s a big if -- they should instead be regarded as one of the Pythagoreans’ greatest achievements. But in reality, it’s most likely that credit for the achievement belongs to Theaetetus: and he was not executed or ostracised, but was highly respected for his mathematical work.
Posted by Peter Gainsford at 15:04