One of the first things a student of classical Greco-Roman mythology learns is that the Greeks and Romans talked about the same gods, but with different names --


and so on. A very few gods, like Apollo, keep the same name. Every myth course starts with a table like this.

So if stories about Zeus, Hermes, and Herakles are the same thing as stories about Jupiter, Mercury, and Hercules ... and the Greeks came first ... that means the Romans stole their mythology from the Greeks, right?

Well, if it were right we wouldn’t be here talking about it. Plenty of sources out there on the web point out that some of the Roman pantheon were native Roman gods, like Quirinus, Bellona, and Terminus. But even they’re seen as exceptions to the rule. Those few are the genuine Roman gods -- not like those other mainstream gods ...

Now, it is true that many of the resemblances between the Greek and Roman pantheons are no coincidence. But the Romans didn’t replace their own gods, and they didn’t steal Greek religion either.

... except when they did. I have to add a caveat: there are a few cases where the Romans really did appropriate Greek gods or Greek religious cults. But not as many as you think, and not the gods you’re thinking of. Let’s look at some reasons for the resemblances. 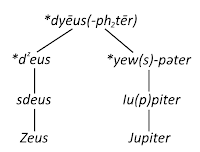 Names of gods, and in some cases maybe other aspects of them, can sometimes be traced back to prehistoric origins. This works the same way that historical linguists reconstruct family-trees of different languages. In this way of looking at things, you could imagine the Greek and Roman gods sort of as cousins.

To an extent, at least. You have to be careful: prehistoric Indo-European links aren’t as pervasive as people sometimes imagine.

For gods with related names, we only have a couple of really good examples. The best known is Zeus-Jupiter. Both of these names can be traced back to a reconstructed Proto-Indo-European name *dyēus-ph2tēr, where *ph2tēr = ‘father’. The name also shows up in India as the Vedic god Dyauṣ Pitā, and in a few other places too. In Zeus’ case, the ‘father’ dropped off (though he’s still regularly called ‘father of gods and men’) and the *dy- metamorphosed into either dz-, sd-, or di-, depending on the dialect and on his grammatical role in a sentence. In Jupiter’s case, the *d- disappeared, and the -ēu/ēw- got assimilated with the following -p-, resulting in -upp- followed by a neutral vowel: Iuppiter. In other grammatical forms, the -pater disappeared too, resulting in the stem Iov- (originally pronounced yōw-). That’s why even in English he can be called either Jupiter or Jove.

Another pair that’s obviously related is Hestia-Vesta. There’s some evidence to suggest a prehistoric Greek goddess called Eleuthera, and one of Jupiter’s cult titles in Latin is Liber: both mean ‘liberator’ in their own languages. [correction:] we know of Latin vegetation gods called Liber and Libera: all of them come from an Indo-European root meaning ‘growth, increase, the people’. [end of correction] And there’s some sort of connection between Greek Eos, Latin Aurora, Vedic Uṣas, and Lithuanian Aušrinė, but in their case it’s questionable whether they derive from an Indo-European goddess or from an Indo-European word meaning ‘east, dawn’: Eos, Uṣas, and Aušrinė don’t have much in common, and we know basically nothing about Aurora.

But for most gods, the name game doesn’t work. ‘Athena’, ‘Demeter’, ‘Dionysus’, ‘Hera’, ‘Hephaistos’, and ‘Hermes’ all appear to have non-Indo-European roots -- mixed with Indo-European elements, in the cases of Demeter and Dionysus (-mētēr ‘mother’, dio- ‘of Zeus’) -- and ‘Apollo’ and ‘Poseidon’ have uncertain origins. On the Roman side, ‘Juno’ and ‘Minerva’ both have ‘Minerva’ has a known Etruscan precursor, which is to say, not Indo-European; ‘Ceres’, ‘Mars’, ‘Venus’, and ‘Vulcan’ come from Indo-European words, but we don’t find any related names among other Indo-European gods of grain, war, sex, and fire.

There are more options when we look at religious practice, divine functions, and story-elements. For example, Zeus and Jupiter both have cult titles built out of verbs: Zeus can be ‘Zeus the Gatherer’, ‘Progenitor’, or ‘Saviour’; Jupiter can be ‘Victor’, ‘Helper’, and ‘Adviser’. Zeus is a Greek sky god who was nursed by a goat as a baby, and gets called aigiochos, ‘goat-rider’ or ‘goat-driver’; Thor is a Norse sky god who drives a chariot drawn by goats. When Zeus enters a gathering of the gods in Homer, they all stand up for him; the same happens for Indra in the Indian Mahābhārata, and for Ea in one Hittite text.

For Roman mythological elements, it’s harder to find Indo-European parallels. This is partly because there’s a severe shortage of information about gods in early Rome. The Greeks had myth encyclopaedias, and scholarly investigations of their own mythology: we have a huge amount of information from them. But from the Romans, not so much. There are snippets in writers like Servius and Pliny, but nothing as systematic as the Greek mythographers. Partly it just comes down to the sheer amount of text that survives: we have about eight times as much textual sources from the Greek world as from the Latin world. Varro, one of the greatest scholars of Greco-Roman antiquity, wrote a long treatise on early Roman religion called Antiquities of divine matters, which ought to be a key source for Roman religion ... but, alas, it doesn’t survive.

Ancient Mediterranean civilisations who were in touch with one another often drew parallels between their pantheons and equated them with each other. When the Greeks looked at Egyptian mythology, they saw some parallels between Egyptian gods and their own gods, so they ended up referring to the Egyptian gods by Greek names: Zeus = Amun, Apollo = Horus, Adonis = Osiris, and so on. Nowadays we call this interpretatio graeca. There was no danger of mixing the gods up, because the resemblances weren’t very deep, and because the different names were linked to different places. Ancient religion was often more about observing local customs than about belief: when in Egypt or Libya, you visit the oracle of Amun; when at Dodona in Greece, you visit the oracle of Zeus.

In the same way, the Romans referred to foreign gods using Roman names. When talking about the Greek Zeus, they’d call him Jupiter; when talking about the Greek Hephaistos, they’d call him Vulcan. And there was an awful lot of Greek myth floating around, so it’s not really surprising to find Romans telling Greek stories with Roman names. Again, this was more a terminological thing than a religious thing.

The Romans did this with other pantheons too. Julius Caesar’s account of Gaulish religion refers to the Gaulish gods by Roman names (Gallic wars 6.17): he says their chief gods were Mercury, Apollo, Mars, Jupiter and Minerva. These could be Lug, Belenus, Teutates, and Sul; but the interpretatio romana of Gaulish gods wasn’t nearly as one-to-one as it was with the Greek pantheon. The equations changed depending on time and place. Teutates could at times be equated with any of Mercury, Mars, and/or Jupiter, and the Gauls had many gods of healing to equate with Apollo.

It is fair to say that in the Roman-Greek case, the resemblances are relatively accentuated by comparison with the Greek-Egyptian or Roman-Celtic cases. Roman religion was unquestionably something very distinct from Greek religion; but elite Roman literature very often took stories about the gods from Greek sources. When Ovid tells stories about gods using Roman names, he’s telling Greek stories (with his own spin on them).. But that has basically nothing to do with Roman religion. Elite poetry and religion have very little overlap.

Some Roman gods genuinely were borrowed, inherited, or copied from the Greeks. Apollo is the most famous case, but there are some other significant ones. The divine twins, Castor and Pollux, were extremely important very early on, in the battle of Lake Regillus at the very beginning of the Roman republic in 495 BCE; and they were definitely not home-grown. They were borrowed from the Greeks, either directly or via the Etruscans. This goes for some important heroes, too, especially Hercules, Aeneas, and Ulysses: Ulysses had a significant role in Roman legend as early as the sixth century BCE, and evidence for Aeneas pops up quickly afterwards (during the reign of king Tarquinius Superbus the Romans founded a colony named after Circe at the supposed location of Circe’s island; one 5th century Greek source, subscription needed, tells us that Aeneas and Ulysses founded Rome together, and a Hellenistic poem has them meeting up near the future site of Rome). Later on, Dionysus-Bacchus became another major import.

But a couple of cautions are warranted. First, it wasn’t a one-way street. Greeks colonised Italy, but Italians visited Greece too: one inscription from ca. 500-470 BCE shows ‘Tyrrhenians’ (Etruscans? native Campanians?) dedicating an offering to Apollo at Delphi. The Latin demigod Faunus shows up in Greek as ‘Agrios’, alongside Latinus, in a passage that got added to the Hesiodic Theogony probably in the late Archaic period.

And second, the borrowings weren’t just about the Greeks. The cults of Isis, Cybele, Mithras, and Christ were ‘borrowed’ in exactly the same way as Apollo or Bacchus. But you don’t hear people complaining that the Romans ‘stole’ Christianity, or ‘replaced’ their own gods with Christ. With the relationship between Roman and Greek religion, the fashion is to assign agency to the Romans: the Romans stole, or borrowed, or adapted the Greek gods. Yet somehow, when it comes to Christianity, you’ll often find Christianity cast as the agent: Christianity expanded, it rose to prominence, it took over the Roman empire. (Did I say ‘somehow’? Well, actually there’s no real uncertainty: blame Gibbon.)

Saying ‘the Romans stole their gods from the Greeks’ makes about as much sense as saying ‘Peter Jackson stole New Zealand cinema from Hollywood.’ It’s nonsensical to talk about theft or appropriation when you’re talking about cultural hegemony. For 6th-century BCE Italians, the Greeks had that hegemony, in much the same way that Hollywood has it in 21st-century New Zealand.

Later, especially in the Pyrrhic War of the early 3rd century BCE, it looks very much as though the Romans took pains to reject Greek cultural hegemony, or at least western Greek. That appears to be when they came close to erasing Odysseus-Ulysses from Roman legend. Aeneas was left as the only ancestral figure: traces of Odysseus-Ulysses remained only outside Rome. His and Circe’s son Telegonus was the legendary founder of Tusculum, and in some sources Caere and Praeneste; in another source, Odysseus himself was buried at Cortona. These cross-overs between Italian geography and Greek mythical figures aren’t an act of Roman cultural appropriation: they’re a collaboration between Greek writers and Italian legends -- just as The Lord of the Rings trilogy is a collaboration between Hollywood and ‘Wellywood’.
Posted by Peter Gainsford at 15:46