The dates of Jesus. 3. Christmas and Easter

Recap. Early sources on Jesus’ dates are vague. Around 200 CE Christians wanted more precise dates than they could get from the gospels of Matthew and Luke, as a direct result of the Quartodeciman controversy. Concocting precise dates involved an eclipse, and trying to make 500 years of regnal periods to line up with a prophecy in Daniel.

These early datings of Jesus don’t usually come up in connection with the origins of Christmas and Easter. But they ought to.

There are two modern theories about how Christmas came to be celebrated on 25 December:

HRT is the popular one. If you’ve heard that Christmas was the result of Christians stealing Saturnalia, or Mithras’ birthday, or Sol Invictus ... that’s HRT.

Susan Roll (2000) gives a good outline of the 20th century debate, which usually favoured HRT. Philipp Nothaft (2012) outlines some important developments since then: new research by Steven Hijmans and Hans Förster has blasted HRT to the eternal oblivion that it deserves. Nothaft himself supports CT (Nothaft 2013). Hijmans is agnostic about CT, and Förster opposes CT: Förster actually puts it that CT requires ancient Christians to have performed ‘breathtaking mental acrobatics’.

HRT hasn’t a shred of credibility and it never should have been taken seriously.

Does that mean I support CT, then? Well, no, not if the C stands for calculation. If it means concocting, then yes.

Does that mean I think early Christians engage in ‘breathtaking mental acrobatics’, as Förster puts it? Well, yes, of course. You did read §2–§5, didn’t you? The acrobatics are in plain sight.

Just look at how selective Clement and Tertullian have to be with their treatment of regnal periods to make them line up with Daniel’s ‘70 weeks’ prophecy. Africanus has to make up the idea that intercalary periods count as extra years, as well as glossing over several bits of Daniel, not least what he says about when the 490 year period begins. Modern editions and translations of Tertullian, even critical editions, frequently ‘correct’ his figures and details because they’re so flagrantly wrong.

And they do all of this in support of a date that was originally reached thanks to a chronological marker they all knew was wrong — the eclipse of 29 CE. Like I said, it’s creative adjustments all the way down.

The whole point of what I wrote in §2 is that, prior to Clement, people avoided calculating Jesus’ dates. They knew perfectly well that there was no hard evidence.

Then everything changed when the Quartodecimans attacked.

Talley (1986) was right about this, at least: the Quartodeciman controversy was the beginning of a tidal wave of frantic Christian interest in chronography. The question was over which day to celebrate Easter. The initial dispute in the 150s ended amicably: Polycarp and Anicetus agreed to disagree, and the Anatolian and Roman churches went their own ways.

In the 190s things really got going. Synods were convened in several places around the Mediterranean to discuss the correct liturgical date to observe Jesus’ death. The disagreement became bitter. The dispute created tremendous pressure to find accurate dates for Jesus’ death, and by extension his lifetime.

And lo and behold, straight afterwards we find Clement discussing dates that are precise to the exact day. We find people arguing over the eclipse theory and rejecting it. We find Tertullian doing somersaults to make Jesus’ dates line up with Daniel, and Africanus creating a new Christian chronography. In the mid-200s we find Anatolius working out a new form of the Metonic 19-year cycle.

The 190s, in a nutshell, is when Christians started paying really close scrutiny to chronographical precision. And, yes, getting it wrong. I don’t exactly blame them. If you pressure someone to produce results, but there’s no good evidence, don’t be too surprised if they come back with poor results.

The date of Jesus’ death and resurrection got pinned to the spring equinox, traditionally reckoned as 25 March in the Julian calendar. That’s the date Tertullian quotes, and it’s the date implied by Hippolytus’ paschal table (220s–230s CE). This wasn’t because of any pagan equinox festival — like I said, there weren’t any pagan equinox festivals to speak of — but a Christian innovation. The main motivation is that Jesus died at Passover, which is linked to the equinox, and the idea that Jesus was ‘the sun of righteousness’, a biblical phrase from Malachi 4.2. One 3rd century source, pseudo-Cyprian, explicitly links the equinox and Jesus’ death to Malachi’s phrase (De pascha computus 19). (Notice that this is decades before emperor Aurelian’s interest in the sun cult.)

Christmas comes into it as a secondary matter. In typological ancient Jewish thought, the prophets were imagined as dying on the same day they were born, living a whole number of years. When it comes to Jesus, though, there’s a discrepancy of exactly nine months between his birth date (winter solstice) and death date (equinox). Why would ancient Christians make his death date line up with conception, rather than with birth?

Throughout the 20th century, this was a serious problem for CT. Roll points out that there’s no evidence for a shift from emphasising birth to emphasising conception, and that’s an insuperable problem for CT (Roll 2000: 288). Nothaft regards it as ‘the only objection against CT that carries some considerable weight’ (2013: 256).

Take heart: there’s actually pretty good evidence if you look in the right place. Schmidt (2015: 548–552) finds it in Hippolytus’ use of the word genesis in the paschal table above. He shows that contemporary sources often use genesis to refer to conception, not birth.

Actually we can put it even earlier. And guess where. Will the real Clement of Alexandria please stand up? And, let me remind you again, Clement is writing straight after the Quartodeciman synods of the 190s.

Clement is emphatic that what he’s dating is Jesus’ genesis. The word ἐγεννήθη in the second excerpt here is explicitly ‘he was born’, not ‘he was conceived’. But it isn’t as simple as that.

If we look at how he uses genesis elsewhere, it’s clear that it’s a way of equivocating between birth and conception. Sometimes Clement uses it to mean ‘birth’ (e.g. Strom. 1.15.71.4 ‘the magi foretold Jesus’ genesis’, which can only mean his birth); sometimes gestation (Strom. 2.18.94.1 ‘the womb ... which was created for the genesis of foetuses’); and sometimes other metaphorical meanings.

But in one passage, in a discussion of sex within marriage, Clement mentions that Christians aren’t required to wash after sex as was commanded in the Hebrew Bible (Leviticus 15.16–18). He calls this post-coital washing ‘baptism’ — and bear in mind that infant baptism was standard by this time. The equivocation is between ‘baptism’ after conception, and baptism after birth. Then he goes on to use genesis to equivocate between both meanings.

82. ⁶ But divine providence through the Lord does not command that (a man) should still nowadays be baptised after sex within marriage, as in olden times. For the Lord does not forbid believers the necessity of procreation: he has cleansed them of sex in one baptism for all time. In that way he has captured Moses’ many (baptisms) through one baptism.
83. ¹ From the beginning the law prophesied our rebirth through genesis in the flesh, and appointed baptism after the procreative <sowing> of seed, not treating genesis as abominable. For it is the sowing of seed that has the power to bring about what appears as a person after they are born (gennētheis). ² So it isn’t that having sex repeatedly is fertile: but it’s the womb’s receiving (of seed) that corresponds to genesis, as the seed is refashioned into an embryo in nature’s workshop.

Rebirth in the resurrection of the body is genesis, but so is conception. We don’t know the exact motivation for this shift from birth date to conception date, but Clement certainly documents the reality of the shift. 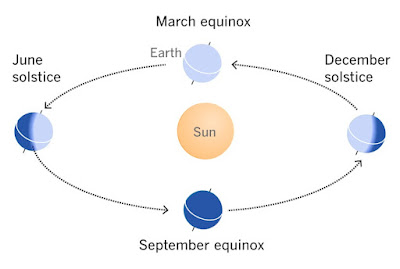 Digression: solstices and equinoxes in the Julian calendar

The winter solstice and spring equinox were traditionally reckoned as falling on 25 December and 25 March in the Julian calendar: for early examples see Columella, De re rustica 9.14.1, 9.14.12; Pliny, Natural history 18.220–221 (both 1st century CE; note that the Loeb translations linked here both mistranslate the Latin dates).

Columella and Pliny use some strikingly similar language, indicating a common source. Columella states that the winter solstice ‘is completed roughly around 25 December, at the 8th degree of Capricorn’ (fere conficitur circa viii calend. Ianuarii in octava parte Capricorni); Pliny states that all four equinoxes and solstices fall ‘at the 8th degree of their (zodiacal) signs, the winter solstice in Capricorn on roughly 25 December’ (in octavis partibus signorum, bruma Capricorni a. d. viii kal. Ian. fere). Their most likely source is Sosigenes, whom Pliny credits as the designer of the Julian calendar. The repetition of in octava/-is parte/-ibus and, still more, the non-technical word fere, indicates that Sosigenes’ work was in Latin.

Pliny gives exact figures for the intervals between each equinox and solstice. Ptolemy, Almagest 3.4, quotes some of the same figures, and attributes them to Hipparchus. Combining the three sources, we arrive at:

Even in Sosigenes’ time the winter solstice and spring equinox didn’t fall on these dates. The 365¼-day cycle of the Julian calendar approximates the solar year fairly well, but it isn’t exact, and it slips out of synch by one day every 130 years. Sosigenes’ use of fere ‘roughly’ indicates that he was aware of the discrepancy, but also that the placement of the equinoxes and solstices was already a codified standard in his time.

The size of the discrepancy shows that the standard dates and intervals go back earlier than Hipparchus. The first and last times that all four equinoxes and solstices fell on the exact dates given above, retrojecting the 365¼ cycle, were in 429 BCE and 298 BCE. The traditional relationship with the 365¼ cycle was presumably codified sometime in that period.

That’s more than a century before Hipparchus was active. In addition, we know Hipparchus put the equinoxes and solstices at the start of their respective zodiacal signs; Columella and Pliny both state that they fell halfway through their zodiacal signs at the 8° mark, as in Babylonian astronomy. So Sosigenes, their immediate source, was evidently not drawing on Hipparchus but on something earlier. Eudoxus, or another astronomer of his time, is a much better fit than Hipparchus both for the timeframe and for the detail of the 8° mark.

The last episode will be a compilation of the sources, given in the original languages and in translation, with notes and bibliography. It will be large.